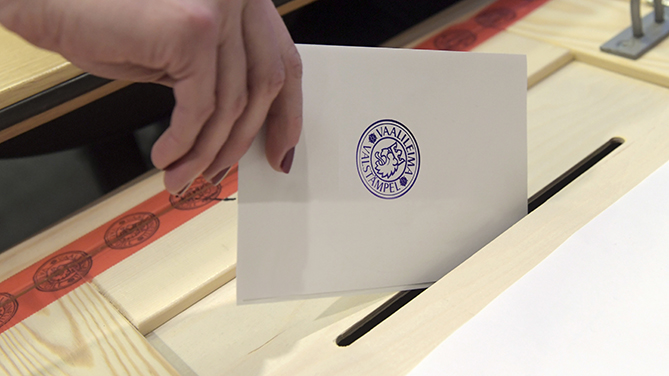 The parliamentary elections will be held on 14 April 2019. In the elections, 200 Members of Parliament are elected for a four-year term.

Every Finnish citizen who has reached the age of 18 by the election day is entitled to vote. The Population Register Centre will send a notice of right to vote, also known as a polling card, to eligible voters by post. The polling card will, however, be sent in electronic format to those 160,000 eligible voters who have activated the Suomi.fi Messages service and given their consent for all official notifications to be sent to them electronically. The polling station at which the voter has to vote if he or she chooses to vote on election day is stated on the card. Enclosed is also a list of the advance polling stations in the voter's own electoral district.

In the parliamentary elections, voters may vote either on election day, which is Sunday 14 April, or in advance during the advance voting period, which is from 3 to 9 April. Voter may only vote for a person who stands as a candidate in the voter's own electoral district. This electoral district is stated on the polling card.

The voter is obliged to present a proof of his or her identity. An official photo ID is required, such as a passport, an identity card or a driving licence.

Eligible voters may cast their vote at any of the general advance polling stations in Finland or abroad. Information about the addresses and opening hours of the advance polling stations is available on the elections website of the Ministry of Justice at www.electionsfinland.fi and at the elections helpline. Calls to the helpline are free of charge, and service is provided in Finnish (+358 800 9 4770) and in Swedish (+358 800 9 4771). Election-related questions can also be sent on WhatsApp (+358 50 438 8730).

People whose ability to move is so restricted that they are unable to come to an advance polling station or a polling station on election day may vote in advance in their own home. Those who wish to vote in advance in their home must notify the central municipal election board of their home municipality of this by 16.00 on 2 April. The family carer of a person entitled to vote at home, living in the same household, may under certain conditions also vote at home.

A possibility to vote by post will be introduced in Finland in the parliamentary elections of 2019. Eligible voters living permanently abroad or staying abroad at the time of the elections will have the right to vote by post in general elections. An eligible voter wishing to vote by post must order the postal voting documents to an address located abroad in advance, cast his or her vote after receiving the documents, and return the ballot in a covering envelope to the central municipal election board of his or her municipality in Finland. Postal voting is possible from 14 March onwards, once the candidate numbers have been confirmed. Postal votes must arrive at the correct central municipal election board by 19.00 on Friday 12 April. More detailed instructions are available at www.vaalit.fi/en/postal-voting.

Young people and new citizens are encouraged to vote

The Ministry of Justice will send a letter introducing this spring's elections and voting to around 70,000 young people who are now entitled to vote for the first time. A letter of similar type will also be sent to people who have been granted Finnish citizenship since the previous elections and thus are now entitled to vote in parliamentary elections for the first time. There are around 7,000 such persons.

The elections website of the Ministry of Justice, electionsfinland.fi, provides information about parliamentary elections in many different languages (in Finnish, Swedish, Skolt Saami, Inari Saami, Finnish and Finland-Swedish Sign Languages, and in several foreign languages, such as English, Estonian and Russian). In addition, the YouTube channel of the Ministry of Justice contains videos on voting in easy-to-understand language and sign language. Brochures in easy-to-read Finnish and Swedish are also available. Information about elections is also provided in a format suitable for the visually impaired.

Information and election results are available on the elections website of the Ministry of Justice at www.electionsfinland.fi