Election of the President of the Republic 2018 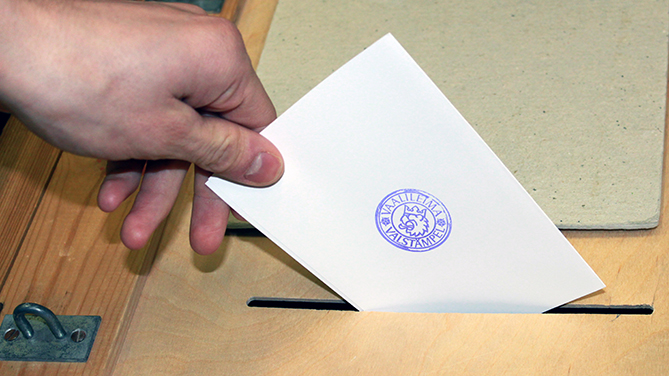 In Finland, the President of the Republic is elected by a direct vote. The presidential election may consist of two rounds, if necessary. The first round of the election will be conducted on Sunday 28 January 2018.

Every Finnish citizen who has reached the age of 18 no later than on the day of the first election is eligible to vote in the presidential election. The total number of eligible voters is around 4.5 million.

All eligible voters will receive a letter from the Population Register Centre containing two polling cards, i.e. notices of right to vote, in December or January. One of the cards is for the first round and the other one for the possible second round. The polling station at which the voter has to vote if he or she chooses to vote on the election day is stated on the cards. Enclosed is also a list of the advance polling stations in the voter's own electoral district.

Voters must prove their identity

In the presidential election, the voters may vote either on the election day or in advance during the advance voting period. Voters must present a photo ID when voting.

The advance voting period abroad is in the first round from 17 to 20 January and in the second round from 31 January to 3 February. However, the voting period is shorter than this at several advance polling stations abroad.

People whose ability to move is restricted to the extent that they are unable to go to a polling station without undue difficulty may vote in advance at home. Those who wish to vote in advance at their home must notify the central municipal election board of their municipality of this by 16.00 on 16 January. The informal caregiver of a person entitled to vote at home, living in the same household, may under certain conditions also vote at home.

The Ministry of Justice will, in cooperation with the Finnish Youth Cooperation – Allianssi, send a letter encouraging voting to those around 50,000 young people who may now vote for the first time. A letter of similar type will also be sent to those roughly 20,000 persons who have been granted Finnish citizenship and thus become eligible to vote since the parliamentary elections of 2015.

Publication of the election results

The aim is to complete the counting of the advance votes by 20.00 on the election day. The preliminary result of the voting on election day should be ready by 22.00.

The constituency electoral committee of Helsinki will confirm the result of the first round on Tuesday 30 January after 10 o’clock. After this, the Ministry of Justice will state whether a second round needs to be conducted. The result of the possible second round will be confirmed by the constituency electoral committee of Helsinki on Wednesday 14 February. The President of the Republic assumes office on the first day of the calendar month following his or her election into office. Thus, the new President’s term of office begins either at the beginning of February or March.

Those who have nominated presidential candidates must file an election funding disclosure with the National Audit Office of Finland within two months from the confirmation of the election result.

Information and results available at vaalit.fi

Information on the advance polling stations and their opening hours is available on the elections website of the Ministry of Justice, vaalit.fi.

Information on the candidates and their candidate numbers will be published on the website on 21 December after 16.00.

During the advance voting period, up-to-date information on the number of advance voters in the entire country, municipalities and electoral districts will be published on the elections website every hour (also during the weekends).

In the evening of the election day of 28 January, starting at 20.00, the number of votes cast in the entire country, electoral districts, municipalities and voting districts will be published as the counting proceeds. During the evening, the results will be updated every five minutes. The results of the preliminary vote count will be published on Monday 29 January also as downloadable files.

The confirmed, final results will be published on the elections website once the recount of votes has been completed on 30 January.

The timetable for the publication of the results is similar for the possible second round.