The constituency electoral committees begin counting the advance votes on election day at 3 p.m. at the earliest (for a particular reason at noon at the earliest). The brown ballot envelopes sent from the municipalities are opened and the ballots within them counted. The results of the advance voting should be ready by 8 p.m. Before this the constituency electoral committees may not reveal anything on how the counting is progressing.

As soon as the doors of the polling station have been closed at 8 p.m. the election board begins a preliminary count of the votes. The board opens the ballot box, counts the ballots within it, and notes down the votes of the candidates in a particular election protocol. Immediately thereafter the board informs the central election committee of the municipality of the votes of the candidates, i.e. of the election results in the voting district. The central election committee again enters the results in the central calculation system in the Election Information System of the Ministry of Justice. Finally, the election board seals the ballots in a parcel and delivers it to the constituency electoral committee before Monday morning 9 a.m.

Determination of the Election Results

The so-called d’Hondt method is used to determine the election results. Thus, in the first stage of the calculation the total number of votes of each group, i.e.

is counted. Parties which have formed en electoral alliance are thus treated as a single group, as are constituency associations on a joint list. In the second stage of the calculation the candidates in each group are ranked in order of their personal number of votes. In the third stage each candidate is accorded a comparative index, i.e. the candidate who has received most personal votes is accorded an index which equals the total number of votes of the group, the second best candidate half of that, the thirdb best a third, the fourth best a fourth, and so on. In the final stage all candidates within the electoral district are listed in order from best to worst according to their comparative index, and the representatives elected from the district are chosen from this list.

Publication of the Preliminary Election Results

The preliminary election results are ready to be published already on the evening of election day. After the polling stations have closed at 8 p.m. the results of the advance voting are published. Thereafter, the preliminary counts by the election boards are entered into the Election Information System as soon as they are ready. Usually preliminary results for the entire election are ready at 11 p.m.

Check Count and Confirmation of the Election Results 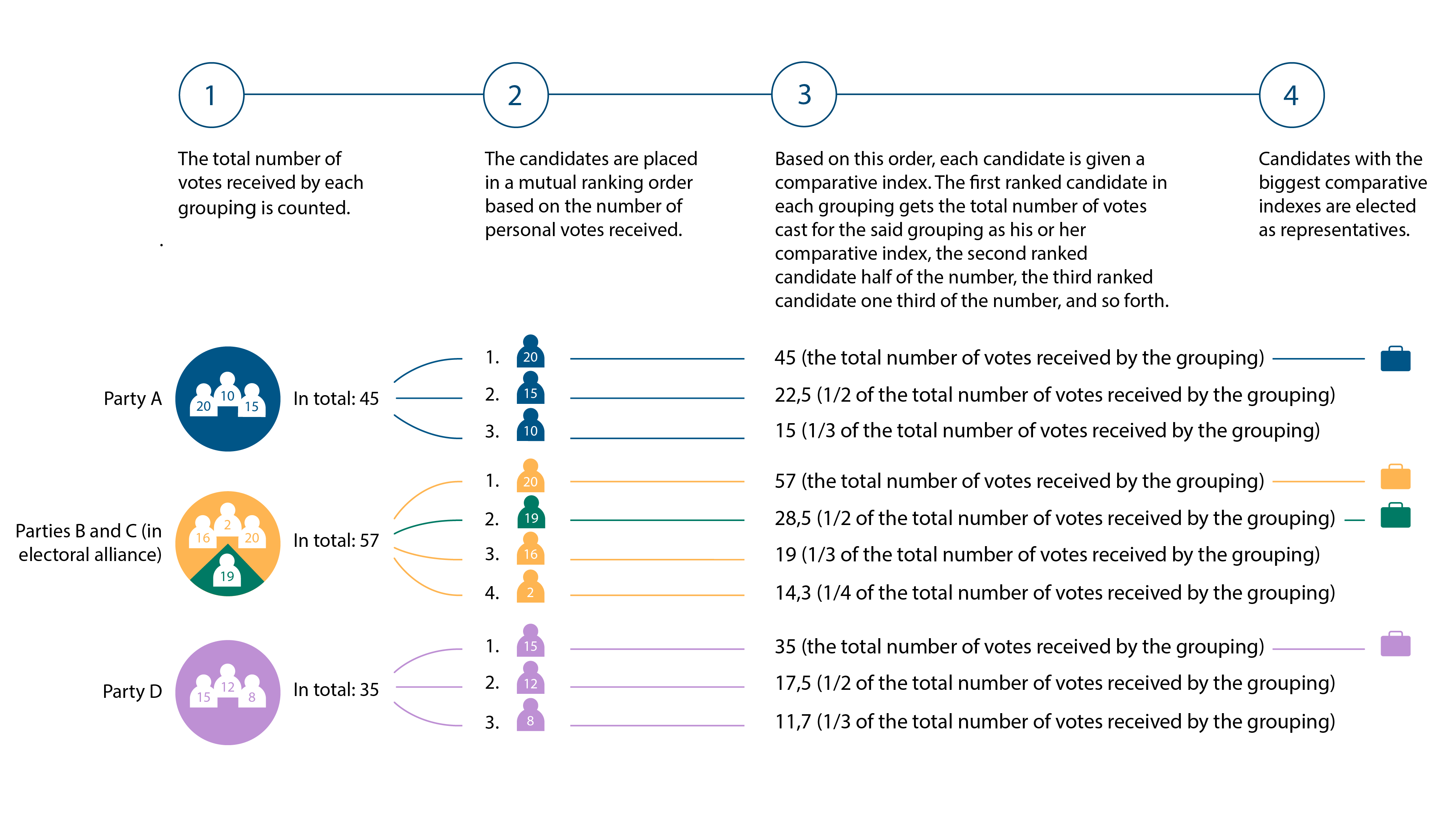