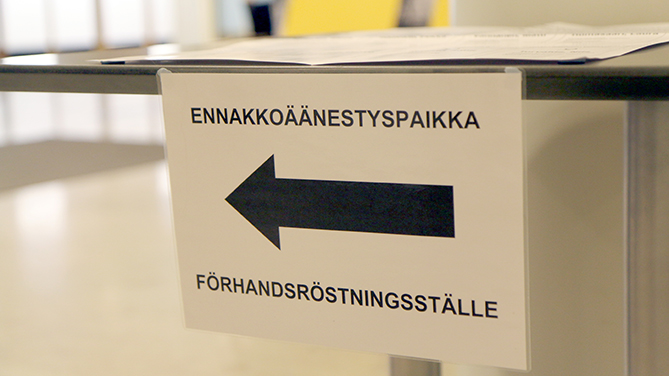 Abroad, advance voting is arranged between 15 and 18 May. At some polling stations, however, the voting period is shorter than this.

There are a total of 910 advance polling stations in Finland. They are located, for example, at town halls, libraries, shopping centres and post offices. Information about the addresses and opening hours of advance polling stations is available on the election website of the Ministry of Justice at www.electionsfinland.fi and at the elections helpline (0800 9 4770; calls are free of charge). Election-related questions can also be sent on WhatsApp (050 438 8730).

Eligible voters living abroad and eligible voters staying abroad at the time of the elections have the right to vote by post in general elections. Information about postal voting is available at https://vaalit.fi/en/postal-voting.

In the European elections, the same candidates stand for election across the entire country. Information about the candidates and their candidate numbers are available on the website www.electionsfinland.fi.

Videos in easy-to-understand language on how to vote are available on the YouTube channel of the Ministry of Justice. In addition, the website www.electionsfinland.fi contains information about the European elections in many different languages and videos in sign language.

Real-time information about voter turnout during the advance voting period can be followed on the election website www.electionsfinland.fi. The number of advance voters in each municipality and in the entire country will be updated on the website every hour.