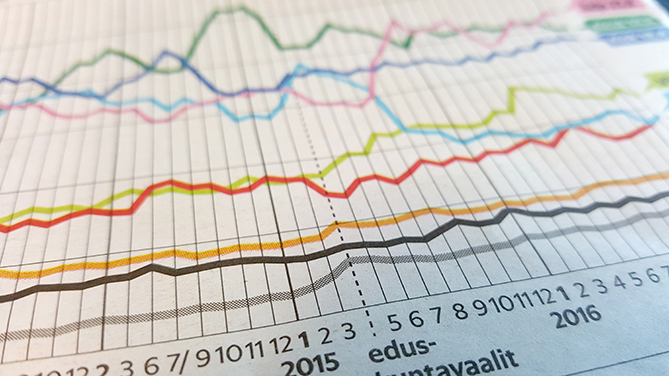 Municipal elections will be held in Finland on Sunday, 9 April 2017. In the elections, municipal councillors and deputy councillors are elected for the next four-year term.

The total number of councillors to be elected in the entire country is 8,999. The local councils’ term of office will begin on 1 June 2017.

The Population Register Centre will send a notice of right to vote (polling card) to all eligible voters. Unlike before, the polling card will be sent in an envelope. The address of the polling station where the voter is entitled to vote on the election day is stated in the card. Enclosed is also a list of the advance polling stations in the voter's own electoral district.

In municipal elections, the voters may vote either on the election day or in advance during the advance voting period. Voters may only vote for a person who stands as a candidate in the voter's own municipality. Voters must present a photo ID, such as a passport, identity card or driving licence, to the election official.

Information on the addresses and opening hours of advance polling stations is available on the elections website of the Ministry of Justice (vaalit.fi) and at the free service numbers, 0800 9 4770 and 0800 9 4771.

People whose ability to move is so restricted that they are unable to come to a polling station may vote in advance at home. Those who wish to vote in advance at their home must notify the central municipal election board in their municipality of this by 16.00 on 28 March. The informal caregiver of a person entitled to vote at home, living in the same household, may under certain conditions also vote at home.

The Ministry of Justice will, in cooperation with the Finnish Youth Cooperation – Allianssi, send a letter encouraging voting to those young persons who may now vote for the first time. The Ministry also supports a campaign by the Network of Multicultural Associations Moniheli, Our Election, which consists of panel discussions and other events in different parts of Finland.

Furthermore, the YouTube channel of the Ministry of Justice contains videos on voting in easy-to-understand language and sign language. Brochures in easy-to-read Finnish and Swedish are also available. Information on the elections is also provided in a format suitable for the visually impaired.

Election results will be published as they are counted

Preliminary information on the counting of votes will be published on 9 April from 20.00 onwards. The preliminary results of the elections will be counted during the evening and night following the election day. Once the check count is completed, the central municipal election boards will confirm the final election results in each municipality on Wednesday 12 April.